Artscape Saga is a project that illustrates classic scandinavian folktales, through StreetArt. I was assigned “The mitten”, an Ukrainian story about a boy who lost his mitten in the forest:

“Nicki ran outside to climb a leafless tree. He climbed and climbed and was almost at the top, when one of his mittens slipped to the ground. “I’ll sit here for a bit and pick the mitten on my way home,” thought the boy.
Meanwhile, a mole tunneling through the snow discovered the mitten. “It’s so warm and fuzzy. I’ll rest here for a bit.”
A snowshoe rabbit hopped his way toward the tree, when he noticed the mitten. He wiggled in. The mole was about to say that there was no more room, but seeing rabbit’s big kickers he simply moved over.
Next a hedgehog sniffing for food came across the mitten. Cold and tired, he decided to warm his body in the mitten. The mole and rabbit seeing the prickles, made the room without arguing.
As soon as the hedgehog was inside the mitten, a big owl attracted by the commotion on the ground lowered his flight. And of course, he wanted to go inside too. As the animals were about to protest, they saw the owl’s talons and let him in.
Up to now a badger, sleeping at the bottom of tree’s opening, woken up by the fuss outside approached the animals. As the animals thought that there was absolutely no more room, they saw the badger’s diggers and showed him the thumb.
It started snowing, when a fox ran looking for a warm place. Seeing warm mitten, it pushed its way in. Shining with its white teeth, the fox had no problem getting in.
A warm and fuzzy bear stumped its way toward the mitten. “I won’t be left out,” with those words he pushed his large body into the mitten. The mitten stretched and bulged, but nobody would argue with such large animals as bear.
A tiny meadow mouse spotted a large warm mitten. No bigger than an acorn, she made herself comfortable on top of the bear’s nose.
The mouse wiggled, tickling the bear with its whiskers.
The bear gave such a forceful sneeze that all animals flew out in all directions.
At the same time, the boy decided it was time to go back home. As he climbed down, the mitten flew up straight into his hand. Happy boy walked to the hut not making much out of a flying mitten a bit bigger than the original size.”

My interpretation was that the boy found the mitten and wondered: “what happened while I was gone?” So he started making up this story, adding more and more animals, as the wool thread drew what he was thinking. I was inspired by some elements from “kurbits” (Swedish embroidery ornaments). 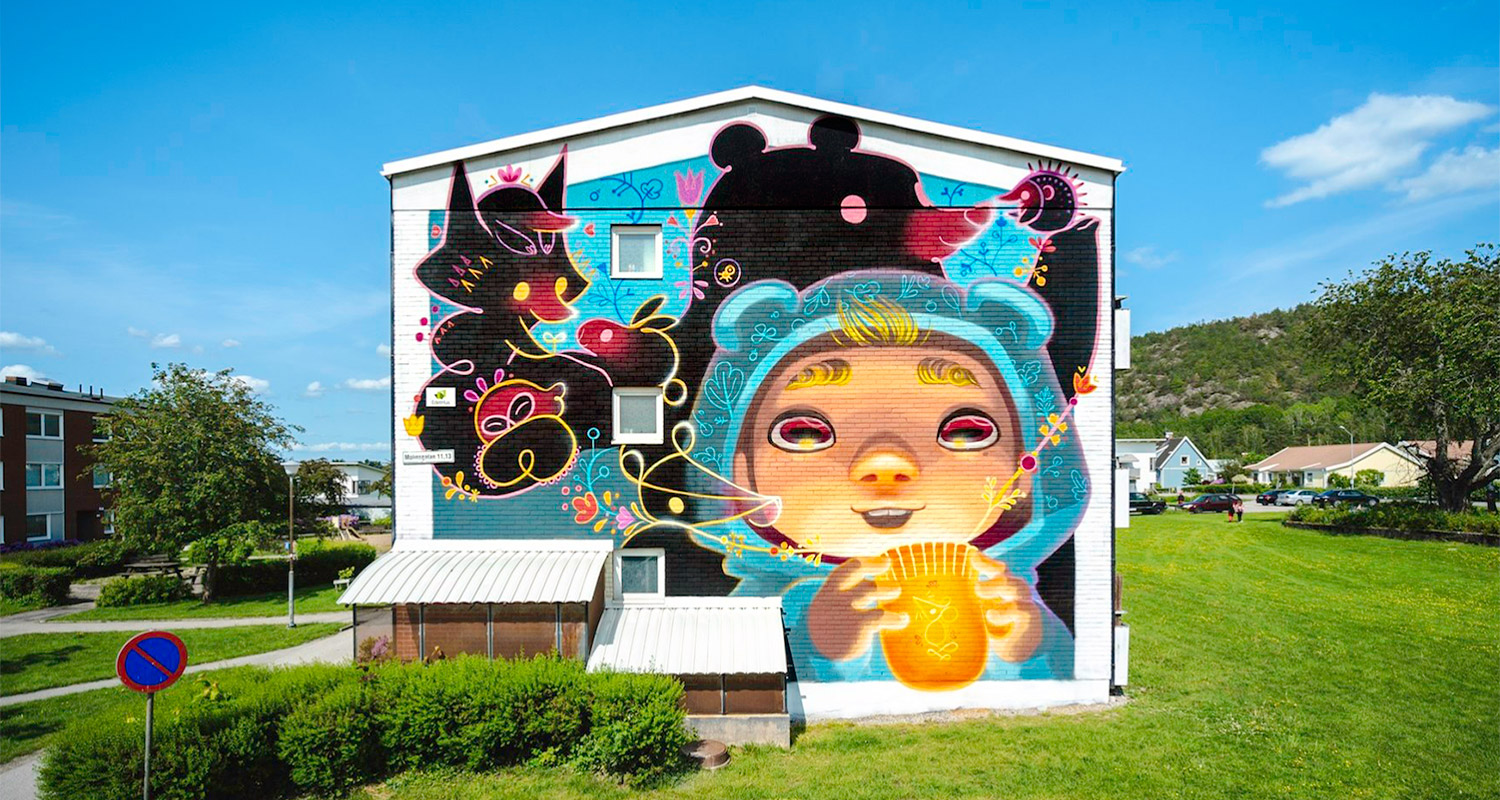 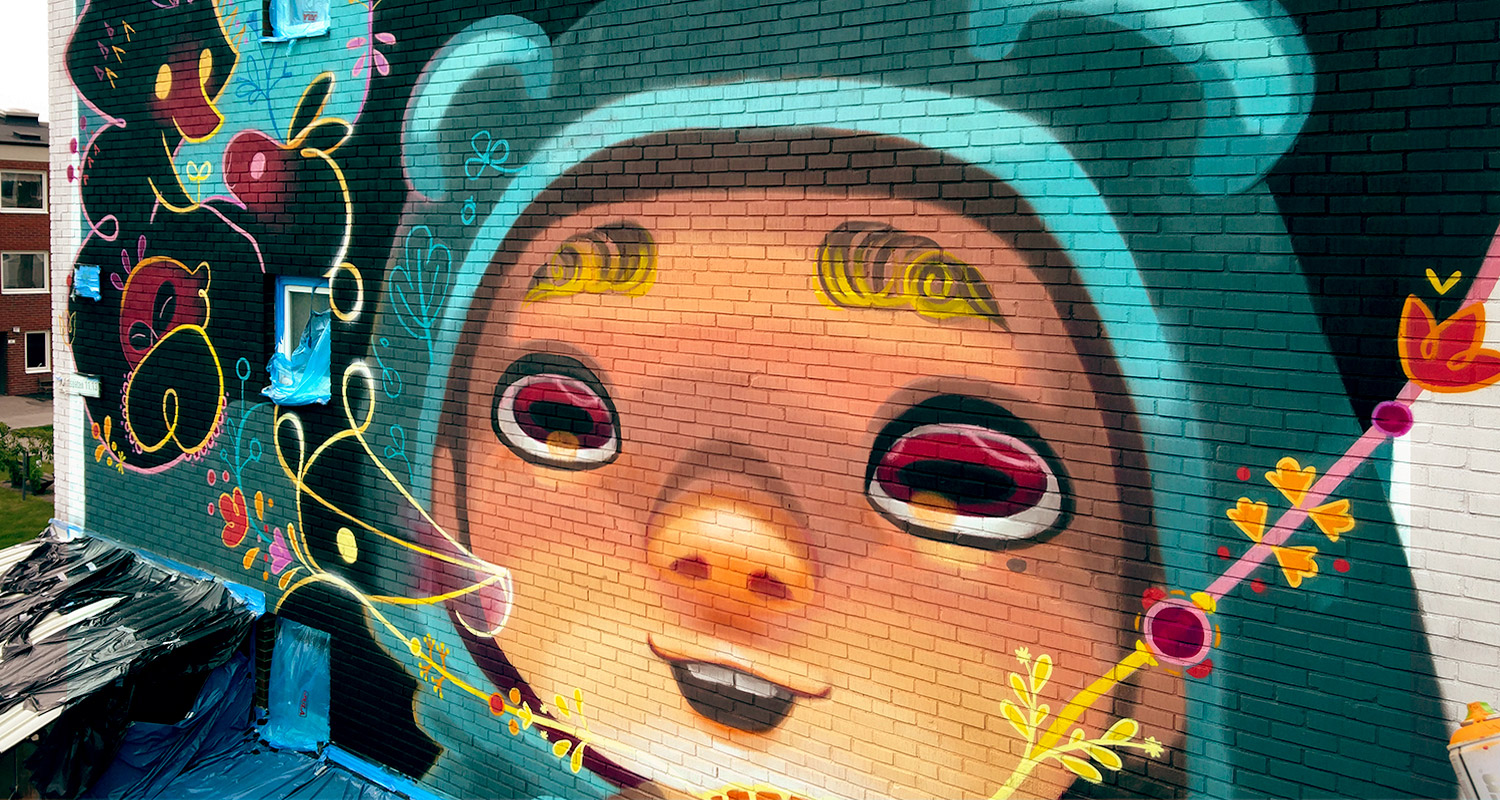 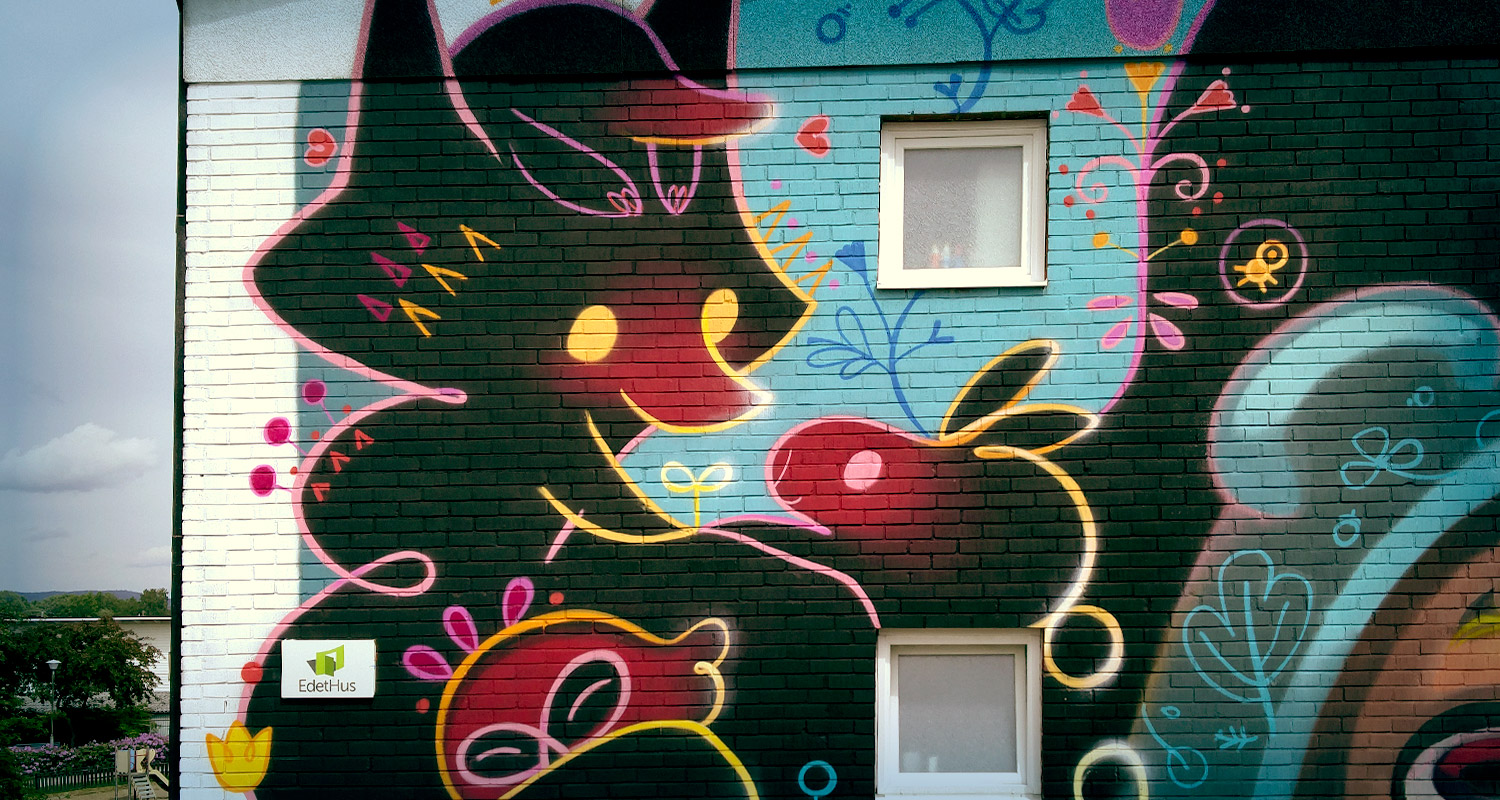 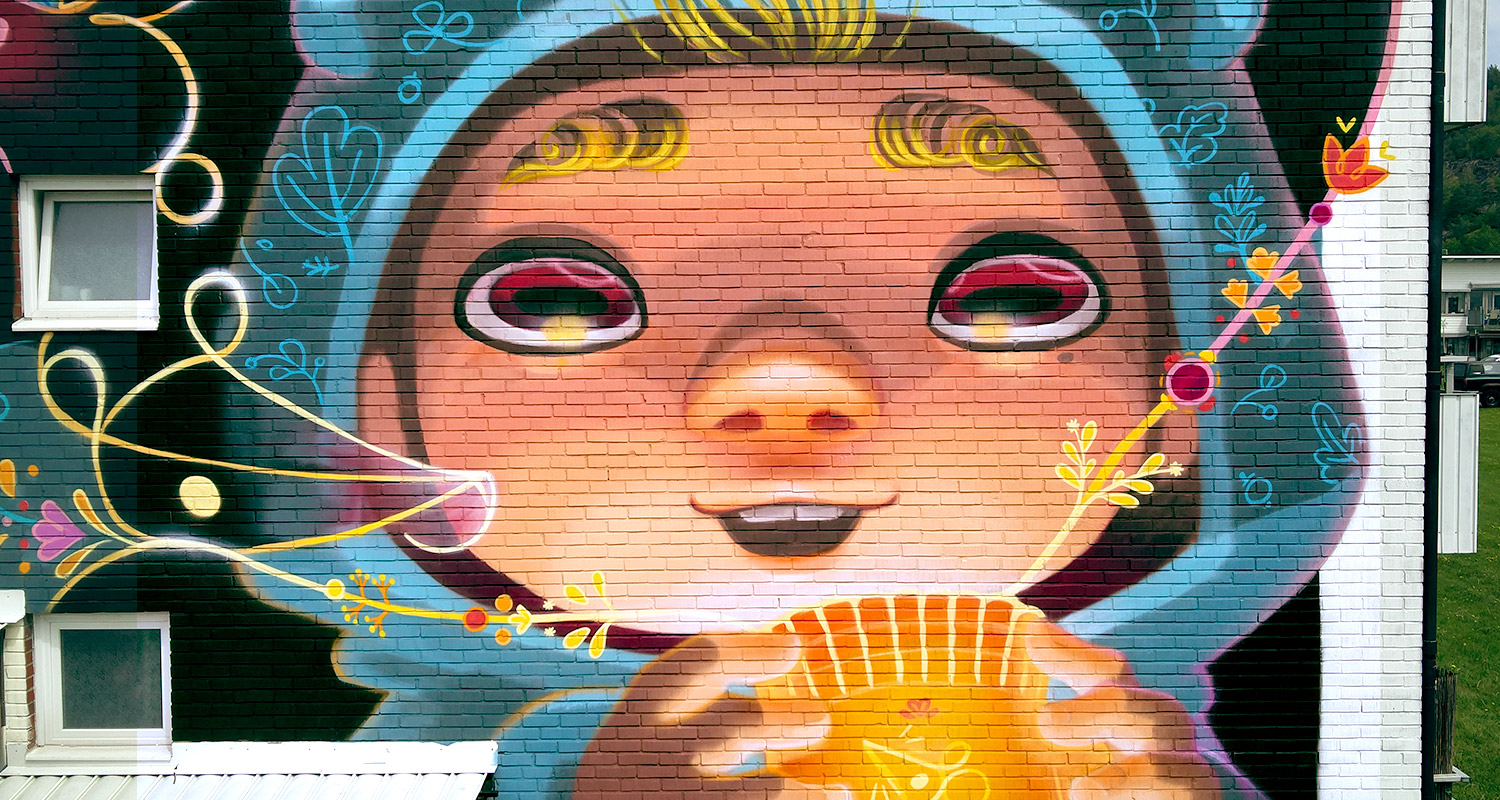 🦔 Hedgehog: On day 1, after I finished sketching all the animals, I got off the lift to get some paint, turned around and -POW! a huge wild hedgehog came out of nowhere and started sniffing my paint. I was actually looking for a color to start painting the hedgehog, so I absolutely felt like I invoked him. He came by the wall everyday, and of course, I filmed it everytime .

🚶 Neighbours: Among the people who walked by everyday, there was Kiki. It was that kind of situations where you exchange smiles, and feel connected without words. One day I recognized one of her dogs’ names: Baloo. That gave me a hint about a common interest (Baloo is the bear from The Jungle Book, one of my fav characters). Another day when we had the chance to speak, I learned the other dog’s name: Babsan. She told me it’s the performing name of Lars–Åke Wilhelmsson, a swedish drag artist. I got more and more curious about her, and life in that small village surrounded by forests and mountains.

💀 The silent spectator: There was a huge truck in front of the wall, I always looked at it because I love machines. But it wasn’t until Kiki told me to look inside, that I noticed the skeleton in the copilot’s seat! “Helge” had been there staring all the time without me knowing…

💥 War Alarm: The alarm system started on World War 2 and it is still in use in Goteborg, for emergency warning in case of approaching danger. They test it the first monday of the month, so I got to hear it.

🔥 Barbecue: The neighbours association organized a barbecue to catch up with the wall, enjoy the sun and grab a bite 🙂

✨ Daily journey: It was a 40′ drive from the hotel to the wall, plenty of time to wake up in the morning as well as chill out after work. It was specially soothing when Majlie drove because her music matched the landscape perfectly. Also her car was stashed with chocolate. Check out the Moose sign in the end! -didn’t see any but it was lovely to think they were around-

More about this project