In SmartEnCity project, Khrushchevs (soviet apartments from the 1960s) were transformed into “Smartovs“: renovated buildings, equipped with solar panels and smart electronics. In addition to achieving greater energy and environmental sustainability, it was planned to give all residential buildings a new appearance.

I asked for neighbours’ testimonies about what that building represented for them:
“When I reach home, I feel happy and calm and being loved. My home is like a small oasis of peace and quiet in the middle of the down town car noise. In my home I have people who I love and miss. When I reach home I’m happy to see them.”
I based my design on these feelings. 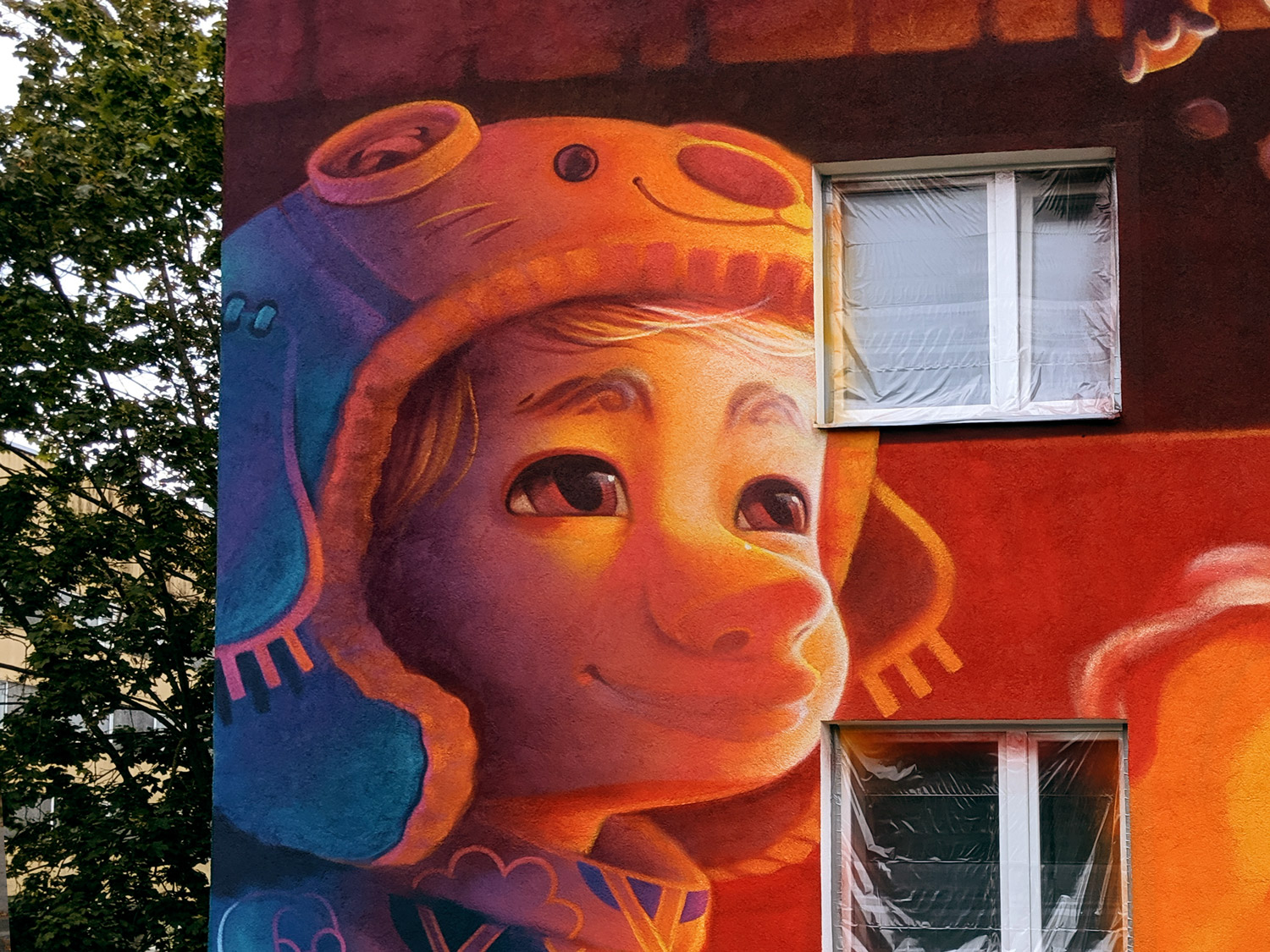 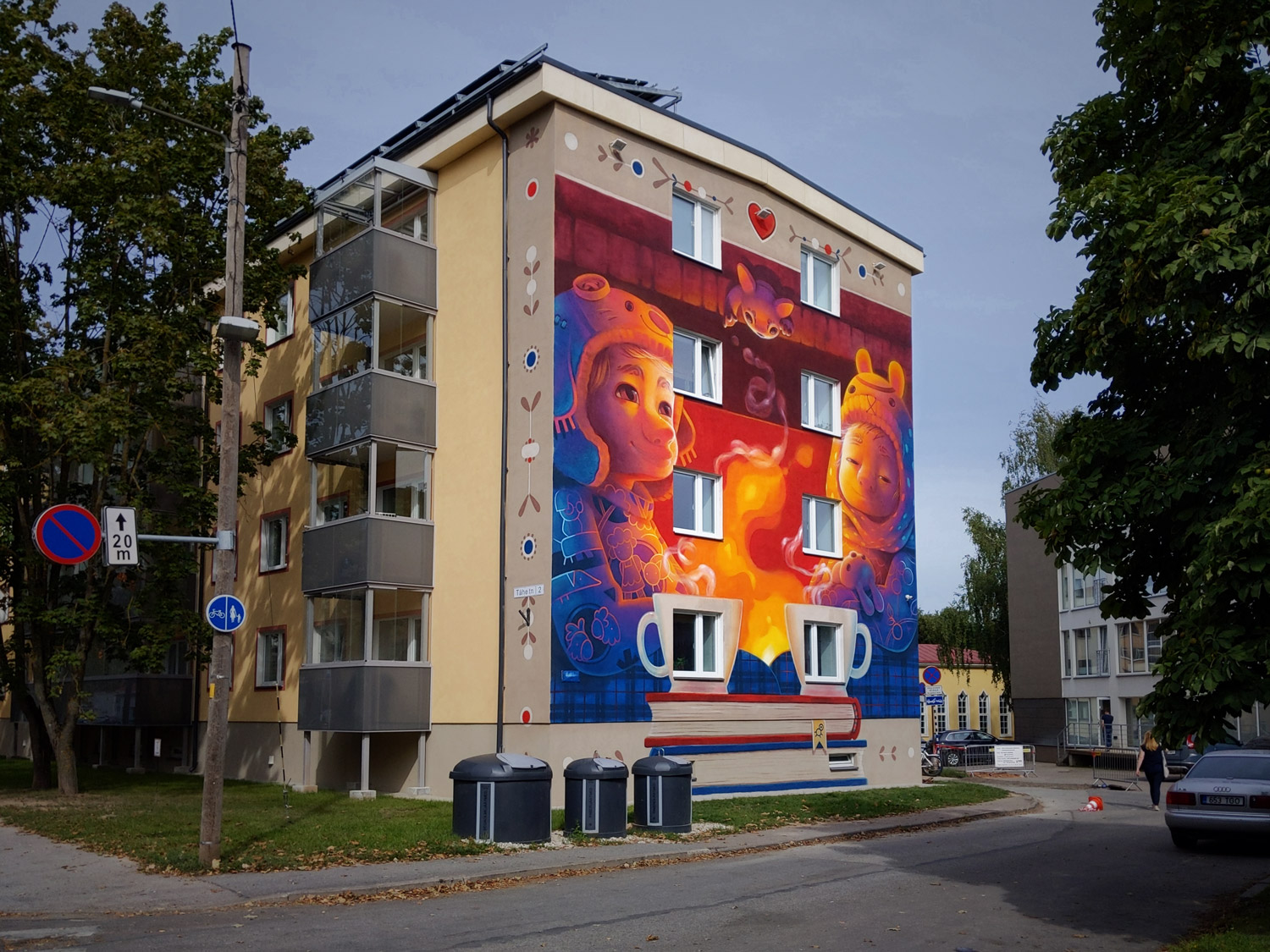 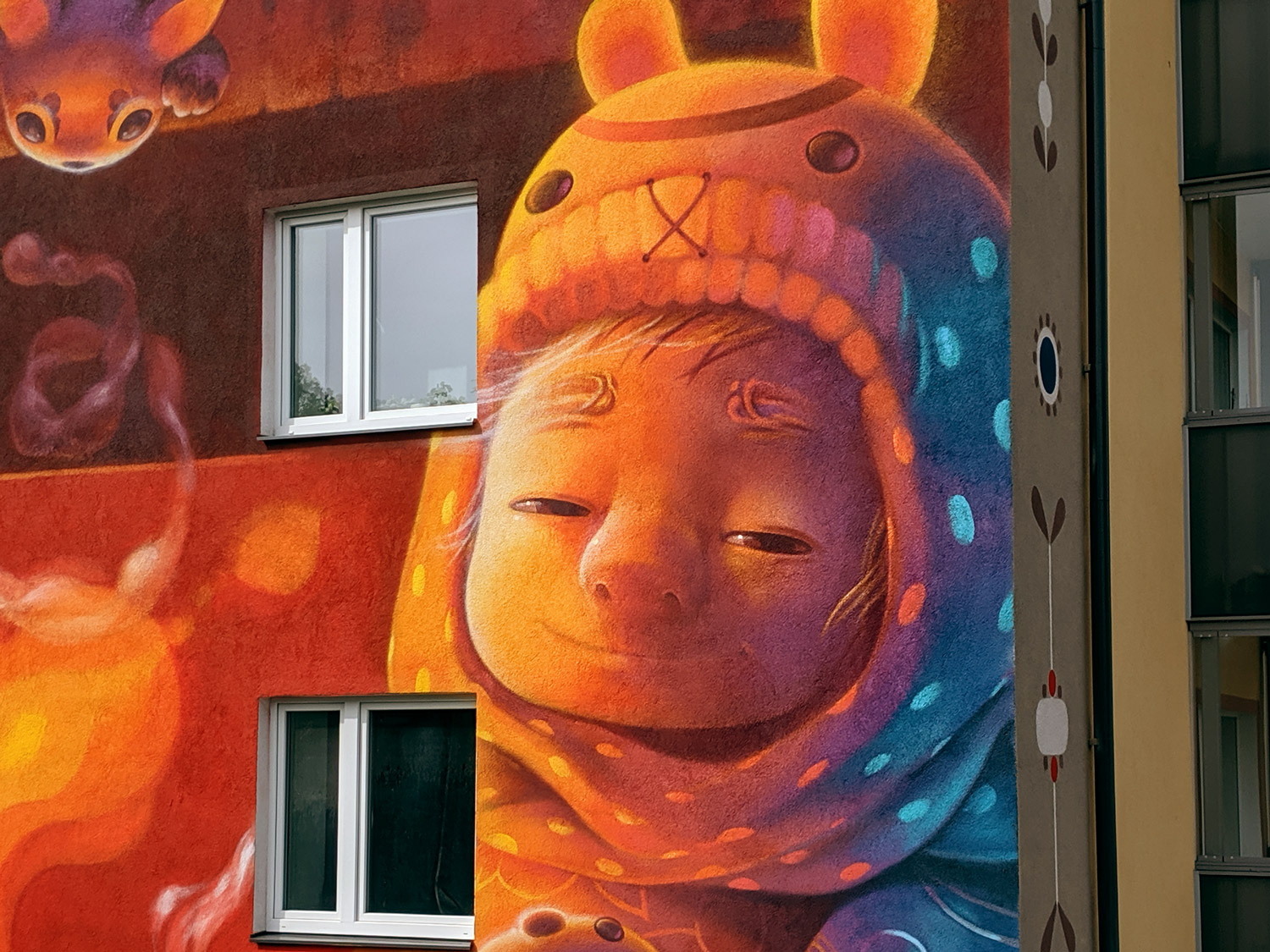 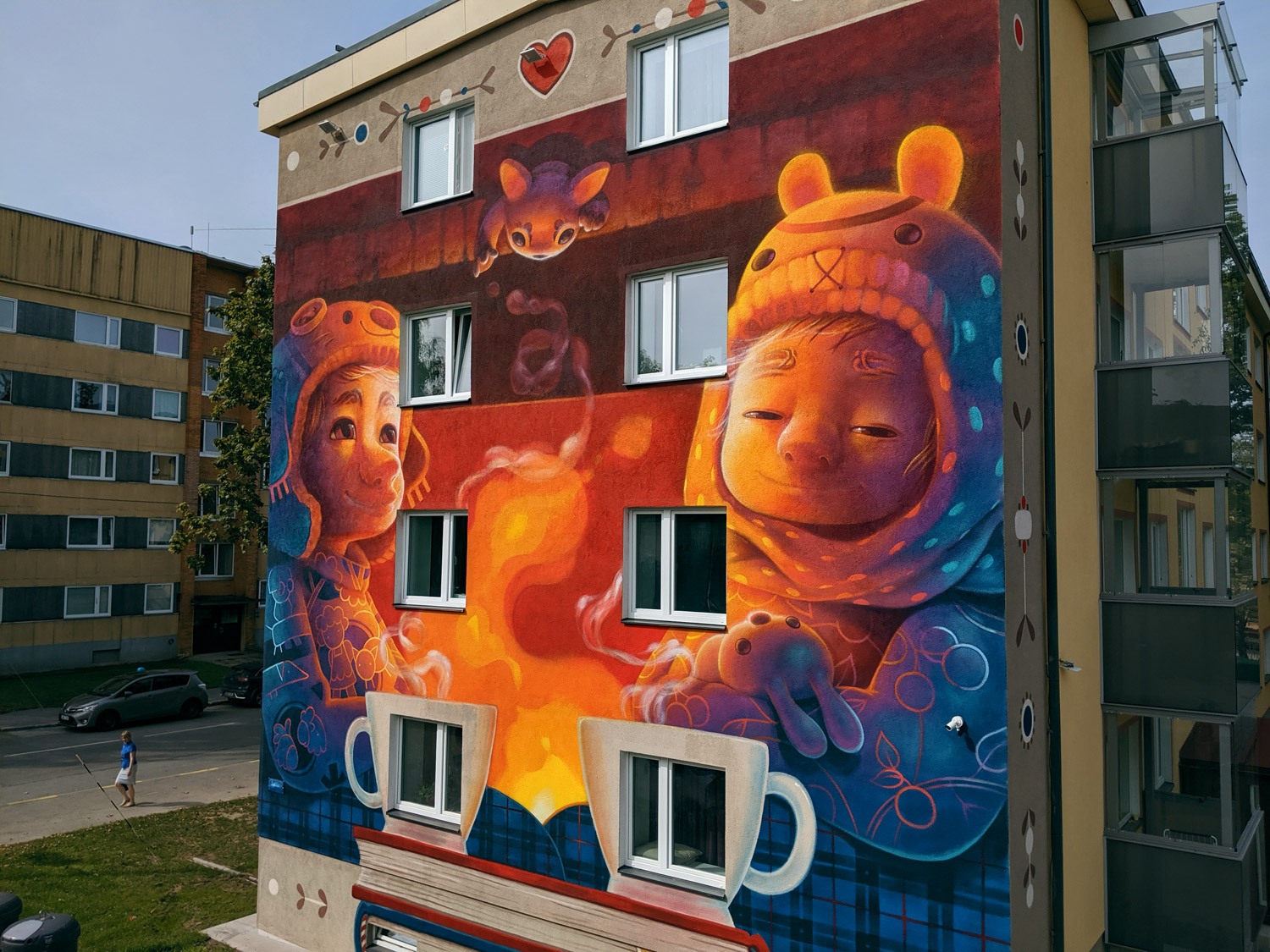 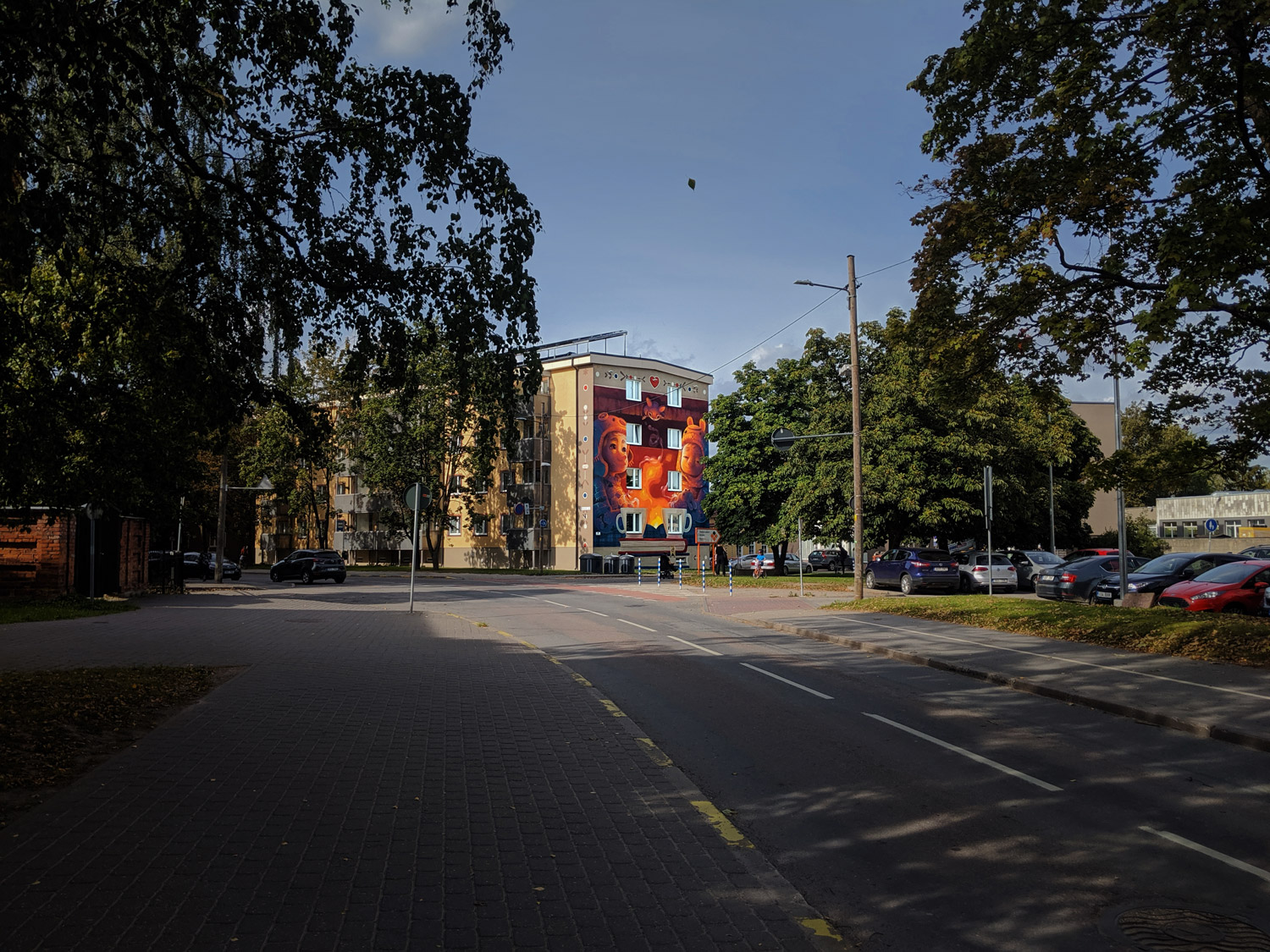 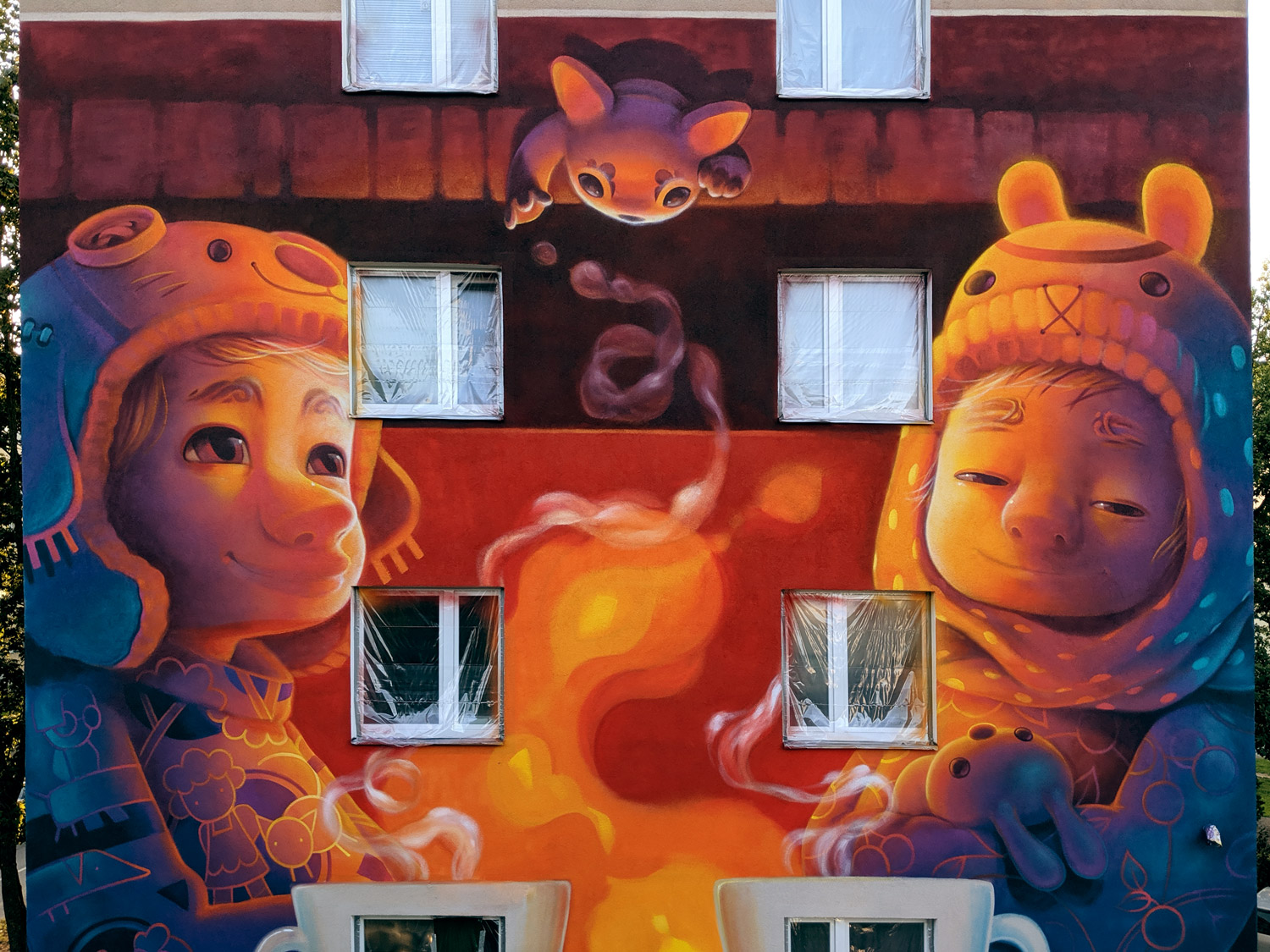 While painting alone, I play music and look around the neighbourhood, spotting the habitués -those who really enjoy public space-. Sometimes we share a talk, sometimes just a distant look. I decided to paint some of them in the wall:

🐱 Catlady: My absolute favourite, this russian neighbour was always out there enjoying fresh air with that cat that behaved like a dog. She didn’t look like walking the cat, but just wandering around, standing at the sun. One day I saw a book left alone near the building entrance, it was in a different place the next day, and I was intrigued until one day I saw her sitting in the stairs reading it. Of course. A couple of people who walked by the mural, mentioned lovable encounters with this “the cat lady” (that’s how I learned she only spoke russian) so it looks like she’s quite a character in the block. I loved the idea of painting her, even in this small form.

🦜 Parrots: One day a neighbour told me he had a mural of a rhino in his apartment. Other day, he was recycling some curious materials, he noticed I noticed, so he shrugged and told me he had two parrots “-and a rhino” I added. He smiled and invited me dinner. That’s how Alex and I became friends. Despite the limitations of language, we shared some really fun moments. He asked me if I danced, to what I answered YES -being latin I kinda trusted my moves- . He turned out to dance latin rythms at a dance studio around the neighbourhood, so that’s how I ended up super confused trying to keep up with the twist and turns of Eastern-European-dancehall-moves. Gotta love life random paths.

🍒 Plums: A lovely neighbour approached one day and told me to get some plums from her bag. “Take more! I have too many” She picked them from her garden, so I had fresh delicious local plums to enjoy during the week.

🐶 Wiener Dog: The shortest legs in town, this little fellow and his human friend walked by every day. I fell in love with his walking style, and how he knew exactly where the stroll was over, and he was not up to walking an extra inch.

🤖 Machines: My lift’s name was “Dino” 🖤. The compressor for the paintgun was not only noisy but made such a scandal that no screws could hold on to it. I loved the cute little pressure display though. Since they were renovating the area, I was surrounded by machines -gotta love those big toys-. I was so tempted to ask the guy let me drive that unbelievable truck. Ever since I started working with heavy machines I kinda understand that construction workers vibe, feels sooo powerful to drive a 4 ton monster.
FUN FACT: “Tagasta puhtana” sounds like an italian curse (I internally cursed when turning that noise on), but actually means “Return clean” in Estonian.

More about this project